Just recently, we reported in depth about the Caraceni tailoring empire, and today, I want to introduce you to a rather special A. Caraceni Flannel suit. Before elaborating on the characteristics of the suit, I want to briefly explain what flannel is and which variations exist.

Flannel suiting is a soft woven fabric that usually comes in a plain or a twill weave and is finished with a fibrous surface. Traditional flannel is made from either woolen (woollen in British English) or worsted yarn, which must be 100% wool.

Often, flannel is brushed for softness and as a result, the weave structure of the fabric becomes practically invisible. Brushing is a mechanical process where a fine metal brush pulls out wool fibers from the loosely spun yarns. If a flannel is brushed on one side, it has a nap, and when it is brushed on both sides, it is called double-napped flannel. One of the most popular colors for flannel is a mélange gray, meaning that it is not quite a solid color but much rather a soft blend of grey tones that looks solid from a distance, due to the nap of the fabric. Another popular flannel pattern is plaid, which comes in all types and forms. The best grades of flannel are made from fine long wool fibers.

Today’s suit is double breasted in a light brown glencheck flannel with a pale blue overplaid. This pattern is also known as the Prince of Wales Check because the Prince of Wales popularized this pattern, although it was invented in the 1840’s as a Scottish District Check, the Glen Urquhart.

Now, you may wonder why this is special, so allow me to explain: In 1983, Eric Musgrave – the author of the fabulous book Sharp Suits – ordered a made-to-measure suit from the legendary English brand, Montague Burton. Not long before, he had seen an ad in the Italian L’Uomo Vogue, where a man wore a double breasted, peaked lapel suit in a light brown glen check with a light blue overplaid. When he picked out a similar fabric and requested a double breasted style, the store manager, who was an old school tailor, remarked that “you can’t have a double-breasted suit in the fabric you’ve chosen… It’s a sports-jacket fabric. It has to be single-breasted.” As you can see, traditionally double breasted suits have always been reserved for formal town wear. A single breasted on the other hand could be worn in town, though it was considered to be less formal than its double breasted counterpart and for the country, single breasted coats were de rigueur. Back then, evolving fashion came into play and switched things up. 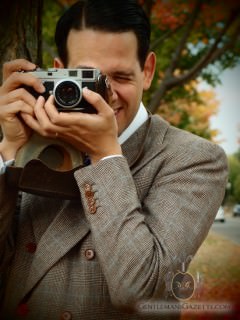 Today, most people are unaware of this subtle distinction, and they are certainly not accustomed to seeing brown double breasted glen check suits. So, when you wear a suit like that, you automatically stand out! Admittedly, in most places in the world today, you would be overdressed in a full fledged double breasted ensemble. If you know the traditional rules today, you are already far ahead of the average man, so you can break the rules and still be better dressed than most.

Of course, according to a quote from the new Anderson & Sheppard Book: “The minute a man is overdressed, he is badly dressed”, you would be overdressed and, hence, badly dressed. But as I pointed out in that book review, I do disagree with that statement… as I am sure you do!

Now, let’s take a closer look at this ensemble: 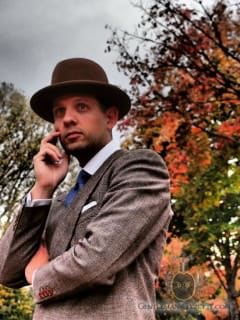 Suit: Double Breasted light brown flannel suit with a  – by A. Caraceni.

Socks: Over the calf, brown – by Bresciani.

Camera: Leica M2 from the 1950’s with a Summicron M 50mm f/2 lens (from 2000) – not many companies build things that can still be used in combination with their latest products with 50 years afterwards.

As always, we welcome your feedback and if you have a pictures of one of your outfits, please let us know.