We’ve taken a deep dive into some iconic and popular footwear options such as the  Jodhpur, Chelsea, and Chukka boots. Today, we take on an extremely popular but often little-understood shoe – the Brogue.

The Definition of a Brogue Shoe

Though the term ‘brogue’ also refers to an Irish accent and other regional accents from the United Kingdom, a brogue for the fashionable man is a dress shoe that features the decorative element known as broguing. The Merriam–Webster dictionary describes broguing (brogue: ing – noun) as an ornamentation of shoes employing heavy perforations and pinking. Therefore, it stands to reason that any shoe with perforations, whether it be an Oxford, Derby, wholecut, or a Budapester, is a brogue.

Many people confuse the term Oxford or Derby with brogue. The term oxford is characterized by its lacing system or to be specific, by the shoelace eyelets that are attached under the vamp. This is called ‘closed lacing.’ On the other hand, a derby has ‘open lacing’ where the eyelets are attached to the top of the vamp.

While initially Oxfords were plain formal shoes, they subsequently evolved into a range of styles both formal and casual. Some of these styles feature broguing or perforations along the edges of the individual leather pieces and thus can be called brogues.

History and Origins of Brogue Shoes

The brogue was originally designed in Scotland and Ireland as a shoe suitable for wearing while working outdoors. The Irish and Scottish countryside is wet and characterized by bogs that made life very difficult for the people who worked there and, as was expected, their feet took a beating. They needed shoes that were suitable for rough outdoor work and terrain. The Irish word brog means ‘a rough or stout shoe’. Interestingly this term supposedly originated from the (rather harsh) perception that the Irish spoke as if they had ‘a shoe in their mouths’.

The original brogues were rudimentary shoes made with untanned animal hide; their distinctive feature was a series of perforations and serrations (broguing) of each piece of leather that was used in their construction. The purpose of these perforations was to allow water to drain from the shoes.

Another feature of their design was that they were laced by leather tangs and did not have the tongue as in other shoes; they also had high lacing that wrapped above the ankles. This design feature kept the laces free from muck and dirt and prevented the shoes from being sucked off while walking in the mud. This basic design is now known as the ‘ghillie brogue’ and is often considered the standard style for traditional Scottish dress footwear.

Brogues were originally designed for outdoor wear and were worn by the working class predominantly in Scotland and Ireland. Over time they were adopted by country gentlemen as an outdoor country walking shoe. It is because of these very roots that they were not considered appropriate wear for other social or business occasions during that time. However, things changed in the twentieth century when the brogue was used as a template for fashionable women’s footwear.

The perforations or broguing were now used solely for decorative purposes. Famous celebrity women such as the actresses Marlene Dietrich and Katherine Hepburn incorporated it into their signature style of daring masculine fashion choices. The model Twiggy also favoured the shoe, reportedly made by George Cleverly after she challenged him to design her pair of flat shoes. All this led to a rise in its popularity. Due to this influence, perceptions began to change and slowly the brogue began to be considered appropriate wear, even for men for most occasions both social and business.

By the 1920’s, brogues were extremely popular with men, especially in the United States but also in England and continental Europe the brogue was now an integral part of one’s show wardrobe. Famous men like Fred Astaire, Gary Cooper, or Cary Grant all wore brogue shoes regularly.

Various designs have evolved over time, introducing subcategories of brogues.

Full brogues or wingtips (which can be used interchageably) have a pointed toe cap with that extends along both sides of the shoe and usually ends near the ball of the foot. When seen from above the cap is shaped like a ‘W’ or ‘M’ depending on the viewpoint. It features broguing along its edges as well as decorative broguing in the center of the toe cap, which is called a medallion. There are a few variations to this style. 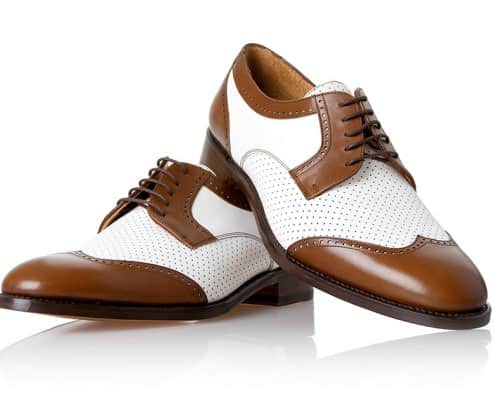 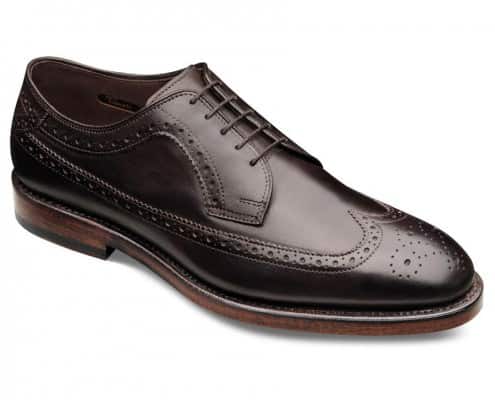 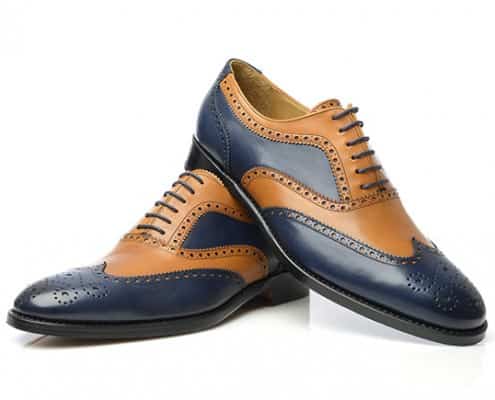 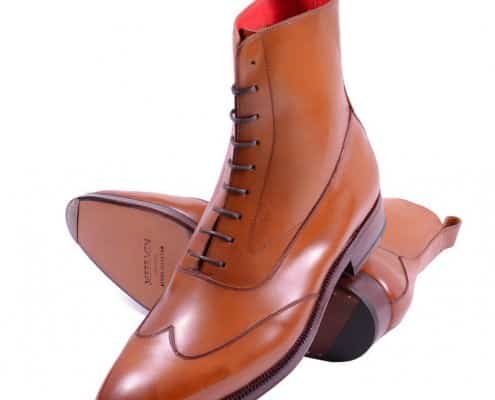 Spectator shoes are full brogues or wingtips in two contrasting colors. Usually, the toe and heel caps and sometimes the lace panels are in a darker color than the main body of the shoe.

Typically the main body of the shoe is made of white or off white leather or canvas fabric, but lately, all kinds of materials, colors, and textures have been utilized including tweed.

A brogue that features a wingtip toe cap with broguing only along the edges and no medallion are called blind brogues.

A wingtip toe cap without any broguing (either along the edge of the toe cap or in its center) is called an austerity brogue even though technically it cannot be called a brogue due to the complete absence of any broguing.

Semi or Half Brogues

Semi or half brogues have a toe cap without extensions or wings and feature broguing both along the cap’s edge and sides. Finally, and have a medallion. This style was first designed by the famous London shoemakers John Lobb Ltd in 1937.

Today, you will find many variations of the semi brogue, including V cap, cap without medallion, and a second, recessed piece of brogued leather behind the cap.

Ghillie brogues are the standard style for traditional formal Scottish dress footwear, including a black version for evening dress. They are a full brogue or wingtip but differs in that they do not have a tongue and have long laces that that wrap around the legs above the ankle and are tied below the calf. Versions of the ghillie brogue are also available without the ankle laces.

A U-Cap or U-Tip brogue is a popular adaptation of a full brogue in which the cap is u-shaped rather than pointed like a wingtip, and wraps around the vamp of the shoe.

Brogues can feature almost any dress shoe closure styles or lacing systems, however, these are not defining characteristics of a brogue except in the case of the Ghillie brogue. Some of the common closure styles available are laced oxfords (closed lacing system) , derby (open lacing system), monk straps (both double and single), side gussets, loafers, and boots (with or without laces).

How to Wear Brogue Shoes

Brogues are incredibly versatile, and most men interested in classic style will have many variations in their closet for a range of outfits. That being said, even today, a full brogue would not be considered the proper shoe to wear with a three-piece pin-stripe suit, whereas a quarter brogue in black or oxblood is a perfect business shoe.

Even though Prince William committed this faux pas, brogues are never appropriate for Black Tie or white tie events, unless you wear black ghillie brogues the Scottish Highland dress, and I’d also shy away to wear them with dark three-piece business suits.

As a rule of thumb, always bear in mind that a shoe is less formal the more broguing it has and vice versa. As such, full brogues are perfect when combined with anything related to country attire, and semi brogues in a darker brown color are very versatile and can be worn with tweed as well as casual worsted sports coats and brown suits.

When worn as a dress shoe with a suit, it is better to opt for either half brogues or quarter brogues as they are not too elaborate and maintain the formality of the outfit. A full brogue is mostly too casual for a worsted suit but will work with tweed or other country fabrics.

On other semi–formal occasions where a suit is not required and where a blazer or a sports coat will suffice the wingtip or muted spectator makes for an ideal choice. It maintains just the right amount of formality and casualness.

In a casual setting , the brogue can be paired with jeans, chinos, and most other casual trousers.

Brogues come in a variety of colors, with the classic colors being brown and black. Of course, there are endless shades of brown but personally I also like oxblood very much and even navy or dark green will work well as brogues.

Spectator shoes are not everybody’s cup of tea and can be difficult to pull off. I like to pair my brown white spectators with light colored or brown trousers or suits, like this outfit above. Others prefer to wear spectators on the golf course only. If you have confidence in your style you can wear them anywhere you want – except for formal occasions of course. The basic rules for matching shoe colors with the rest of your outfit apply here as well.

While most brogues are made of boxcalf leather, they are available in suede, scotch grain, and all kinds of other leathers. Ideally, you should opt for smooth or at least uniform leathers to make the broguing shine. For example, ostrich brogues or stingray are so dominant that a brogue shoe would look simply overdone.

Most brogues you see will be the traditional kind of regular or symmetrical hole perforations. However, in recent years I have also seen more creative broguing such as shotgun or buck shot brogues that look a bit like somebody fired a shotgun onto the leather. So, if you are more inclined to be fashion-forward this could be an interesting way to combine the classic look.

While I have seen some men wear brogues with shorts, I have to confess that I am not a fan of this look at all. For me brogues work especially well with Blazers, Hacking Jackets, turtlenecks, sports coats, casual suits in lighter colors and tweed or even a Harrington jacket.

Every man should have at least one pair of brogue shoes and once you increase the number of shoes in your collection, probably half of your shoes or more will have some sort of broguing. If versatility is your goal, the oxblood semi brogue is probably the way to go but a chestnut brown will also work with many outfits. Of course, if you work at a bank, law firm, or a similar white collar job, go with black quarter brogues.

If you are kind of in between, suede full or half brogue in various shades of brown are appropriate. For country boots, I like tan but I also half full brogue  boots in oxblood cordovan.

It would be impossible to list all manufacturers of brogues; even narrowing it down to 50 or 100 companies that produce quality footwear would be a challenge. In the future, we will publish another guide on how to purchase quality footwear in general, which will also apply to brogues. With this general guide on brogues, you should be able to find brogue footwear that fits your style and suits your needs.

What are your favorite brogues, and why? Share with us in the comments below.

Did you like this article? Check our Shoes and Boots Guide for more.
48 replies

Black Suits for Men: Should You Wear Them? Smarter Outfit Options

Rolex Watches: Are They Worth It? Men’s Watch Review – Datejust,...
Scroll to top