Oscar Wilde once famously stated: “One should either be a work of art, or wear a work of art.” Since most of us are not quite a work of art, the best one can do is follow Wilde’s second piece of advice, usually when out and about. 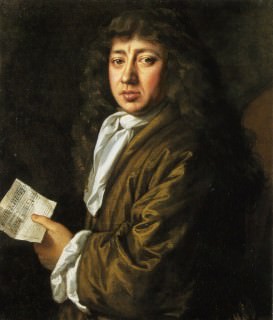 However, only very few dress up while at home. Instead of wearing pajamas or (heaven forbid) sweat pants, you should think about converting to a lounge robe–also known as a dressing gown. In the following article, I will discuss the almost-forgotten dressing gown and encourage you to invest in such a piece yourself.

Men’s gowns can easily be dated back to the 17th century. These robes were only worn inside and sometimes called called Indian or Persian gowns due to their Eastern origin and Oriental cut, was similar to a kimono. First, they were made out of cotton and later of jacquard silk–also known as brocade, velvet or damask. Just like today, many dressing gowns did not have buttons and were instead worn with a sash. Alternatively, these gowns had frogged button closures, which can now be found on Smoking Jackets.

In the 19th century, dressing gowns proved to be particularly suited to the gentleman  for his morning toilette as well as in the evening. By the 1860’s the dressing gown had mostly evolved into its current shape, cut with a broad rolling shawl collar, which reached almost to the waist and a string or a sash. 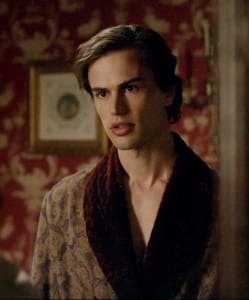 In the beginning of the twentieth century, central heating was still an uncommon luxury and consequently, most robes were primarily functional and necessary to stay warm while at home. Unsurprisingly, long robes were made of thicker wool and cotton–sometimes quilted–and most often worn in solid colors and unspectacular plaids. According to Watson’s description, Sherlock Holmes wore one of these robes quite frequently. Only upper-class gentleman would wear more decorative dressing gowns, such as those seen on the newly released TV drama Downton Abbey. After World War I, fashion started to become more significant, even for the average gent. This trend continued, and by the mid-twenties, a fashion-conscious man was almost as thoughtful in choosing his dressing gown as in choosing his topcoat.

During the 1920s and 1930s, dressing gowns were rather long, generally reaching almost down to the ankle. The New York City based firm of A. Sulka & Company offered a number of robes, such as a lightweight French flannel with broad horizontal striping and a heavily fringed belt (also called a tie sash). Similarly popular were dressing gowns made out of heavy silk brocade or jacquard fabric with abstract or representational designs. In the US, these motifs were often remarkably similar to traditional Japanese or Persian motifs. These depicted everything from Spanish bullfights, dancers, and paisley to Asian dragon and Oriental scenes in shades of gold, green, burgundy, purple, or blue.

Robes in flannel, vicuna or toweling and housecoats in velveteen or wool were also available.

Sometimes, dressing gowns were offered together with slippers. There was a robe choice for every man, ranging from $2 for a simple model to $90 for luxurious vicuna gowns. Most dressing gowns featured large notched lapels with cord trimmings on the edges, the pockets, and on the cuffs. All nice dressing gowns were referred to as lounging robes, while those in heavier cottons were identified as a bathrobe. 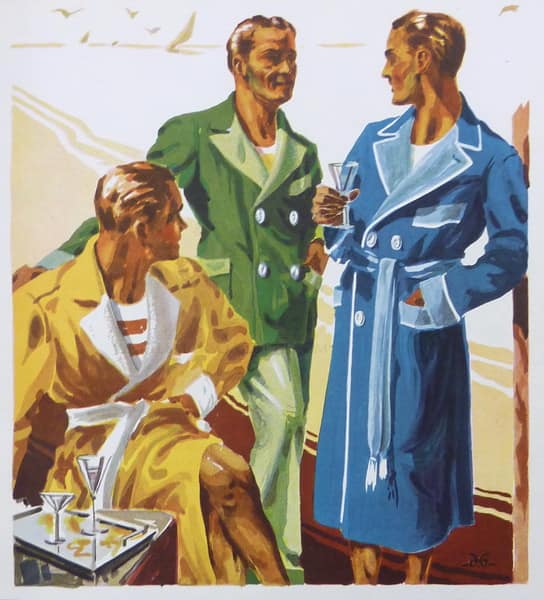 In the mid 30s, beach robes gained quite a bit of popularity, especially in Palm Beach. At that time, buttoned dressing gowns were still the norm. However, slowly but surely, the wrap-around style gained momentum since it was very easy to adjust the robe to one’s individual figure.

Also, shawl collars became more popular for silk and fine woolen dressing gowns, especially when the robes had contrasting colors or tone-in-tone trimmings. With regard to color, dark red tones became en vogue, and black robes sold well when they had white or gold piping.

Despite the myriad changes, many men felt still attracted to simple flannel robes. Often, they had an emblem or monogram sewn on the outer breast pocket. 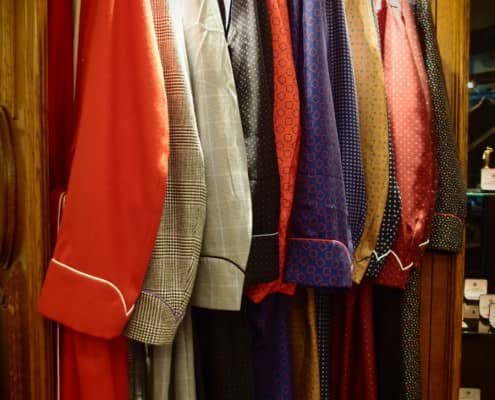 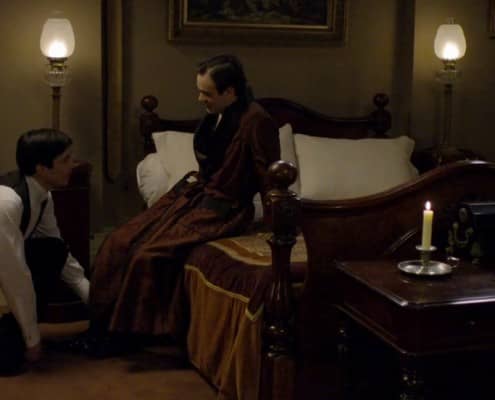 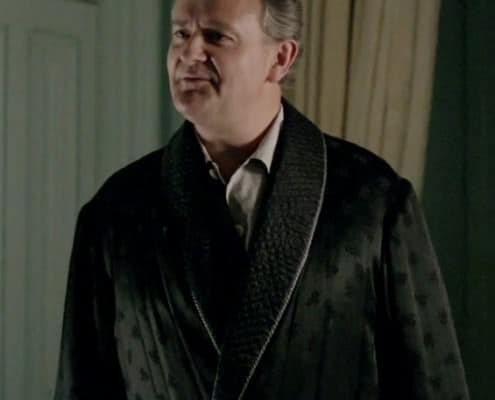 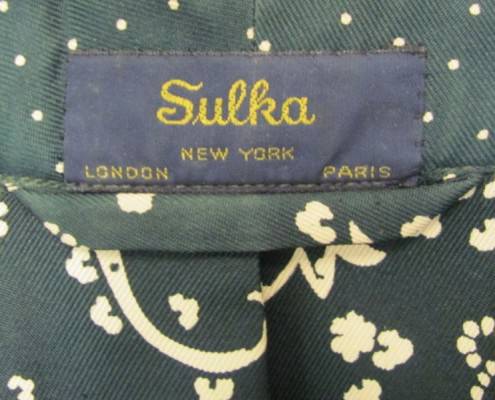 Nowadays, only a very small number of men still wear a dressing gown, which is rather sad. Due to the lack of demand for the last few decades, there are only a handful of manufacturers left that produce top-notch dressing gowns. They are still available for purchase in cotton, wool, silk or cashmere, but the designs and details are not as elaborate as they once were. By far the most gowns today come with a shawl collar in the wrap-around style. Only the most expensive off-the-rack gowns come with velvet lapels and cuffs or other luxurious trimmings. Most frequently, robes are made of cotton flannel and rarely made out of silk. Of course, there is always the option to go bespoke, and every good shirt maker should be able to tailor a beautiful gown but it is rather costly. 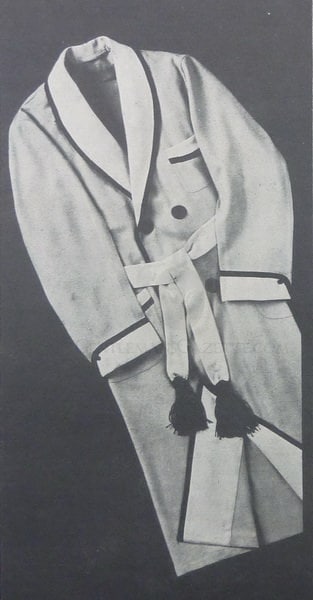 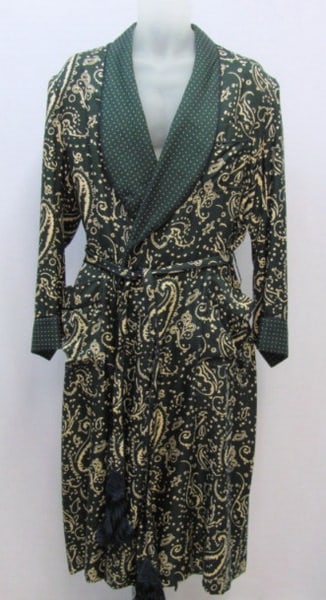 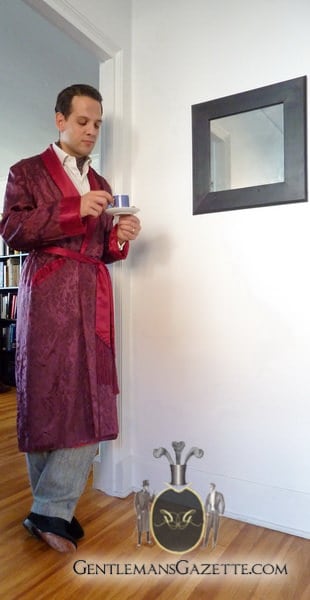 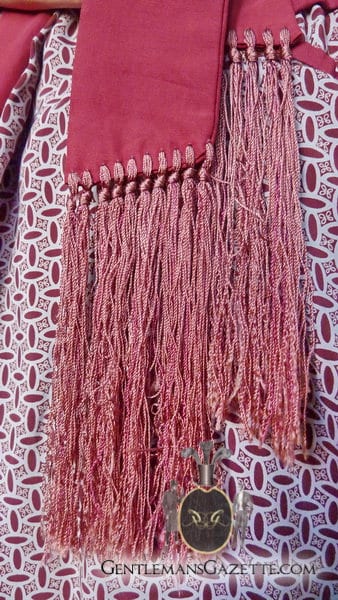 Most dressing gown manufacturers today are located in the UK. My favorite RTW robes are either vintage or made by Daniel A. Hanson in Nottingham, England. As an adopted son of an Anglican Bishop, Daniel Hanson was confronted with formal gowns of all kinds form a very early age. After his studies in Fashion Design, he started his own business in 1989 focusing on making top notch dressing gowns. He tries to source only the best materials (his cotton is organic and comes from Texas) and decorates some of his dressing gowns with hand embroidery. They can easily require 150 labor hours to produce, which leads to a retail price up to £4500. His robes are sold only in establishments like Harrods, Fortnum & Mason and Selfridges in London, Neiman Marcus, Bergdorf Goodman and Barneys in the US, or Mitsokoshi in Japan. In the near future, there will also be the option to order gowns online at the Daniel A. Hanson website, which is unfortunately not online yet.

Dressing gowns can also be found at Brooks Brothers, Derek Rose, Drakes, New & Lingwood, Sean O’Flynn, Turnbull & Asser and Budd Shirtmakers in London, Charvet in Paris, and at Knize and the Zum Jockey Club in Vienna. In case you know where else one can purchase these rare garments, please let me know. One last word: keep an eye out for dressing gowns in vintage clothing shops, where they can often be had for a steal.