Denim jeans and t-shirt is probably the most popular garment in the men’s world today but just because something is popular doesn’t mean it’s the most flattering for your body type.

Brief History Of The T-Shirt

First, it started out as an undergarment for laborers and workers and before then, they would wear a union suit which was a combination of undergarment of pants and shirt then they cut it apart and the t-shirt was born. Sometime between 1898 and 1930, the US Navy adapted a t-shirt as an undergarment and issued it to their soldiers. In the beginning, it was a white cotton crew neck t-shirt that had short sleeves. It was only meant to be worn as an undergarment below a uniform so it’s never to be seen, or in hot climates, or in a submarine. Sometimes soldiers would take off their uniform and just use the cotton undershirt and eventually, that became very popular because it was easy, it was comfortable, it was easy to clean and inexpensive. As such, it made its way to the public and it was particularly popular as a boy’s shirt because it was cheap. You could have different colors and it was functional. The term t-shirt did involve around the 1920s but ever since it has conquered the world.

Sometimes soldiers would take off their uniform and just use the cotton undershirt and eventually, that became very popular because it was easy, it was comfortable, it was easy to clean and inexpensive. As such, it made its way to the public and it was particularly popular as a boy’s shirt because it was cheap. You could have different colors and it was functional. The term t-shirt did not evolve around the 1920s but ever since it has conquered the world. 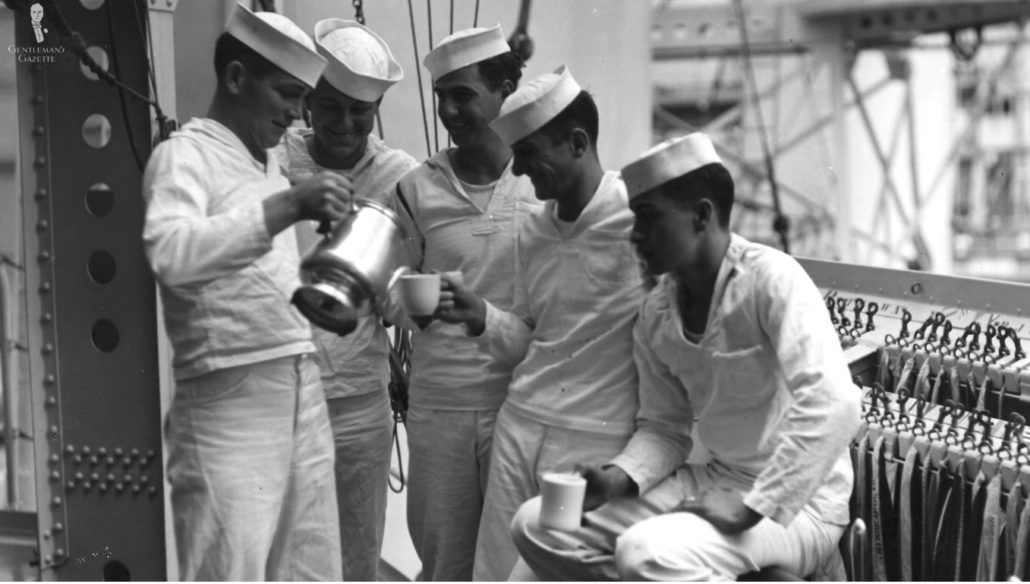 Today, t-shirts are popular with men for the same reasons; first of all, it’s cheap. It’s cheap to make, it’s relatively inexpensive to buy, on top of that, it’s easy to put on, you don’t have to worry about it, and so a lot of men wear it all the time. Even though the retail price is low, a t-shirt is actually very inexpensive to produce because you have very few seams, the fabric is produced in such a bulk volume that it’s very cost-effective, and so you can produce a t-shirt today that costs less than one dollar if you go to low-cost countries. Even if you produce a higher-end t-shirt of a better fabric, maybe with some more details, usually couldn’t produce them for under ten dollars.

In terms of retail, you can buy them anywhere from $3 all the way up to thousands of dollars depending on whether it’s a designer like Dior or not. Even if the retail price is really up there, it’s still a cheap shirt that was meant to be worn by boys and as an undergarment by laborers. So, it’s not ideal if you want to show the best side of you. 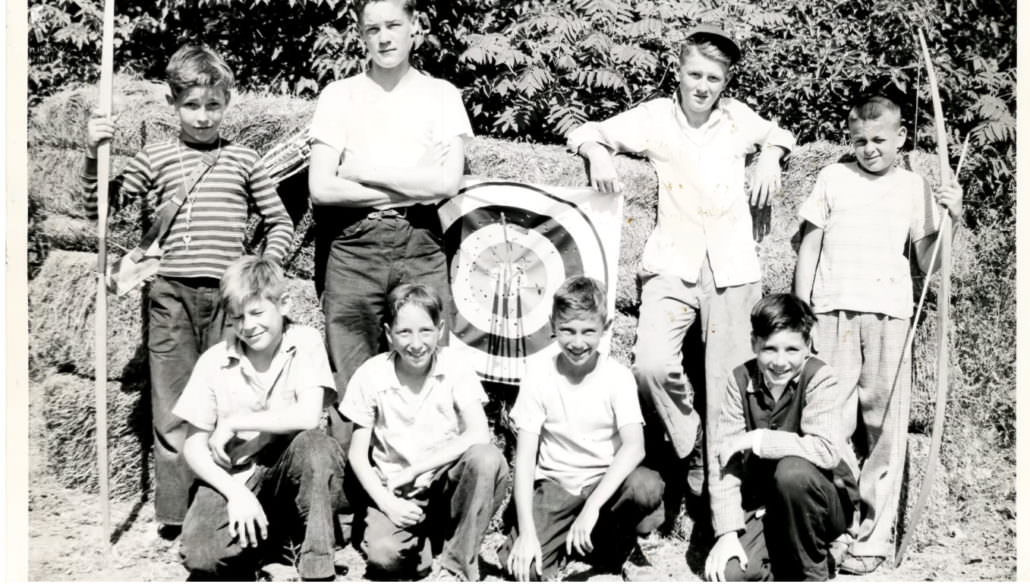 When Can You Wear A T-Shirt? 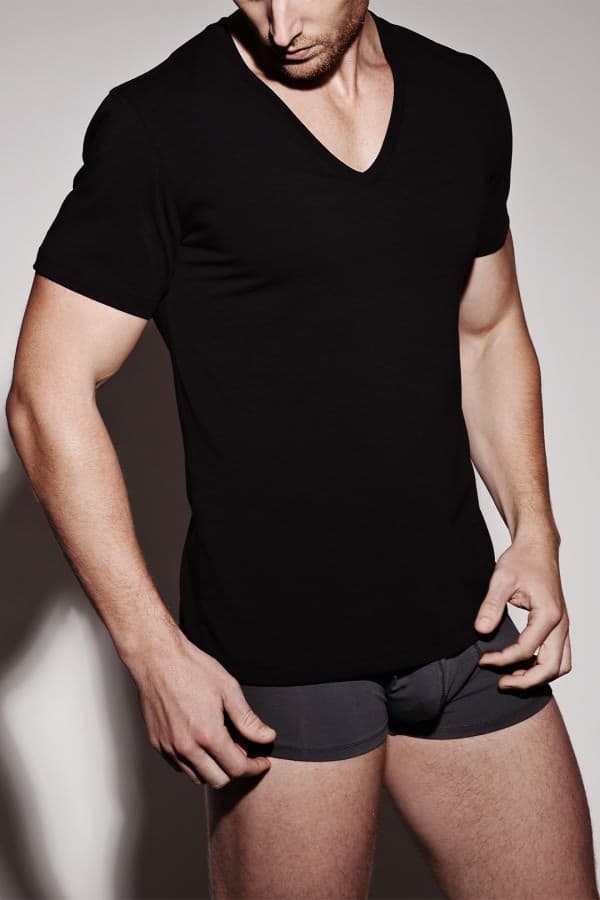 I think it’s great if you have work to do in the yard, if you mow your lawn, for example, if you go to the gym. When involved in a physical activity, rather than using plain cotton, you might want to go with more advanced fabrics that have a moisture wicking property such as modal. Cotton can absorb up to 27 times of its own weight in moisture and if you keep it at your body it might be drafty and uncomfortable. As such, the cotton t-shirt will stick to your body and be uncomfortable, so when you workout, go with something more moisture wicking and avoid cotton. If you do lots of training with weights, you need more arm movement consider to skip a t-shirt and go with something that’s sleeveless; it’s gonna be more comfortable and more effective for your workout. 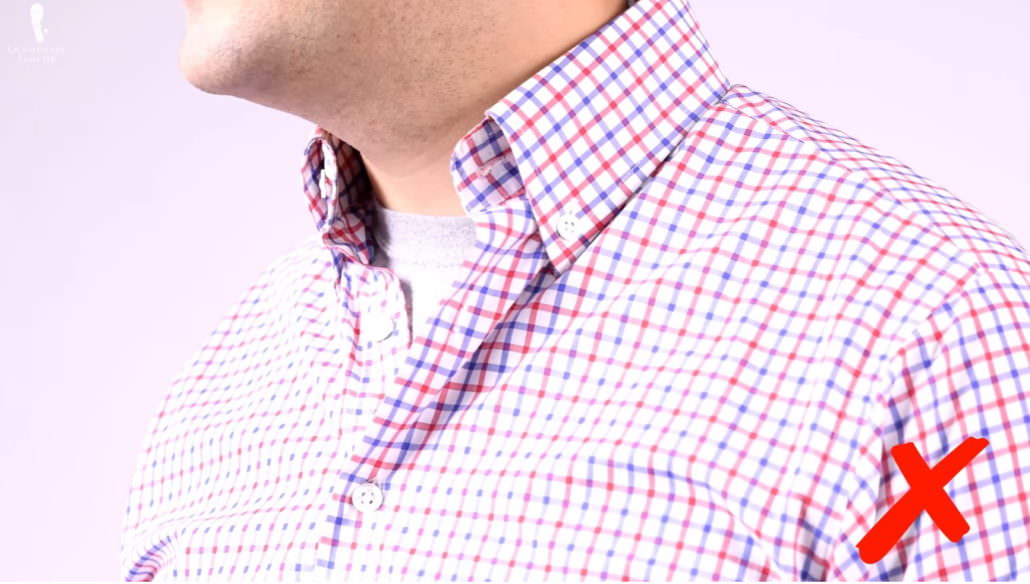 t-shirt as an undershirt

You could also wear a t-shirt as an undershirt, however, that’s not very smart because t-shirts typically have this crew neck, sometimes of a v-neck, but it’s quite high and if you wear a dress shirt on top of it, you can see it peek out from underneath the collar which looks extremely cheap and bad. Also, undershirts are typically tailored differently, they’re longer so they don’t come untucked, they had a much deeper cut out so you don’t see the collar and typically they come in colors closer to skin tone so they won’t show underneath let’s say a white dress shirt. 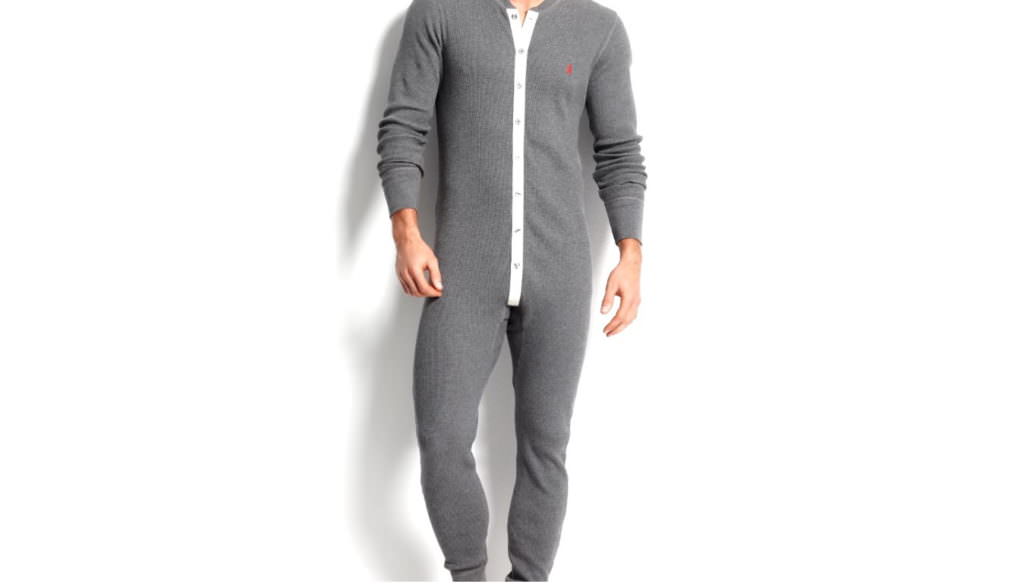 A t-shirt can also be great as a PJ substitute and a lot of men like to wear it when paired with underwear. Another popular place for t-shirts is clubs or when you go out at night and frankly when I was a teenager, I wore t-shirts. And in order to stand out sometimes, I would go for more designer shirts and remember I was once in Hungary and I got this really cool shirt for a very low price and it was a party and someone wanted to have it desperately, so I sold it to him on the spot for $150. I felt like and million bucks that night, problem is, if you wear a t-shirt when you go out to a club, you really don’t stand out, you just fit in because that’s what most other people wear and unfortunately, it doesn’t flatter your body style very much unless you’re in great shape with big shoulders, big biceps, and a very trim v-shape. And even then, the t-shirt is very thin and it just doesn’t flatter you as well as other garments would. Sometimes, people want to express themselves by using a logo t-shirt and well the slogan may be great like haters will always hate, or whatever it is, it makes you look rather immature. So if that’s the look you’re going for, go ahead and wear those t-shirts otherwise, I suggest you upgrade.

Why Should You Wear A T-Shirt?

Basically, it’s easy it’s convenient, you don’t have to think about it, but if you’re honest with yourself, if you just invest five more seconds, maybe choose a dress shirt, and you button up the buttons, it will give you an entirely different look. On top, of that it makes you stand out from the crowd and you’re not perceived as cheap but as stylish, isn’t that good? 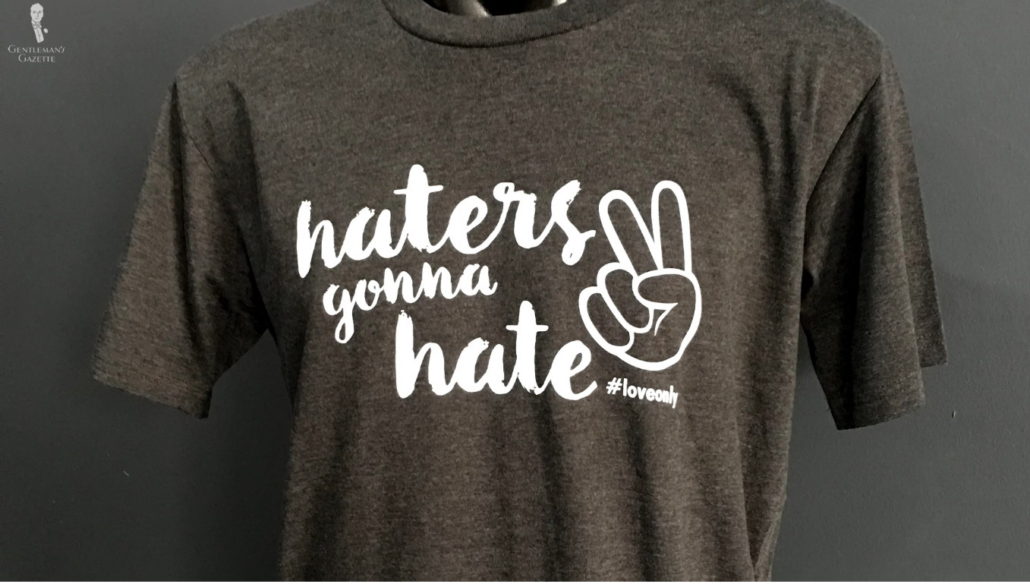 statement shirts are definitely not dapper

Why Not To Wear A T-Shirt?

First of all, it shows every imperfection your body. Take a look at me for example, I have sloping shoulders and you can easily see the wrinkles right away because the fabric is so thin and that’s just unadvantageous. At the same time, my right shoulder is more sloped than my left one and so if I move around a little bit, usually especially with a wider crew neck or v-neck, the t-shirt shifts and it makes me look at asymmetrical.

Now, humans are programmed to find symmetrical faces and things to be more attractive and so a t-shirt makes me look less attractive just because my body is not symmetrical and neither is yours. A t-shirt is also not flattering if you have thin arms because the contrast highlights your thin arms. At the same time, if you have a little bit of a belly, maybe some love handles maybe man boobs, a t-shirt will always accentuate all those flaws and why would you want?

I would even go so far to say that a t-shirt makes you always look worse than you are because it has very thin fabric and it dramatizes your bodily imperfections. If you want to learn more about what type of garment and what style of garment suits your body type I suggest you check out this guide and video here. Of course, if you’re in great shape, if you have that desirable V shape, if you have big guns, yes go ahead and wear well for the t-shirt, it will flatter your look but at the same time, it’s not proper for formal situations or if you go out an evening.

What Should You Wear Instead? 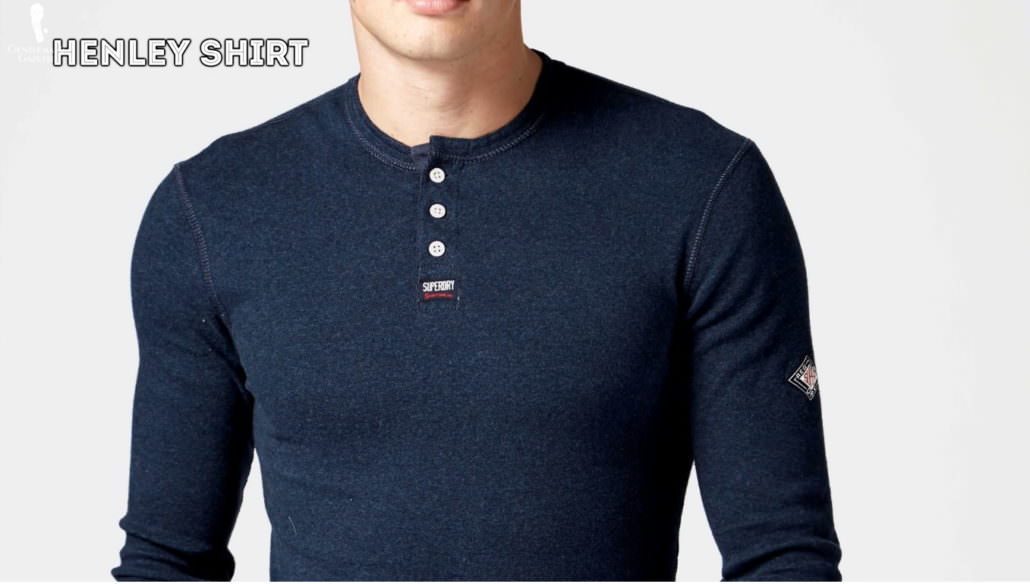 Ideally, if you want to take it one notch up from a regular t-shirt. I suggest to invest in a Henley shirt. Basically, it has the same properties of a t-shirt, however, it has a heavier fabric that drapes better and it also has a fly with buttons which just is an interesting detail that makes you instantly different than other people around you who wear t-shirts. 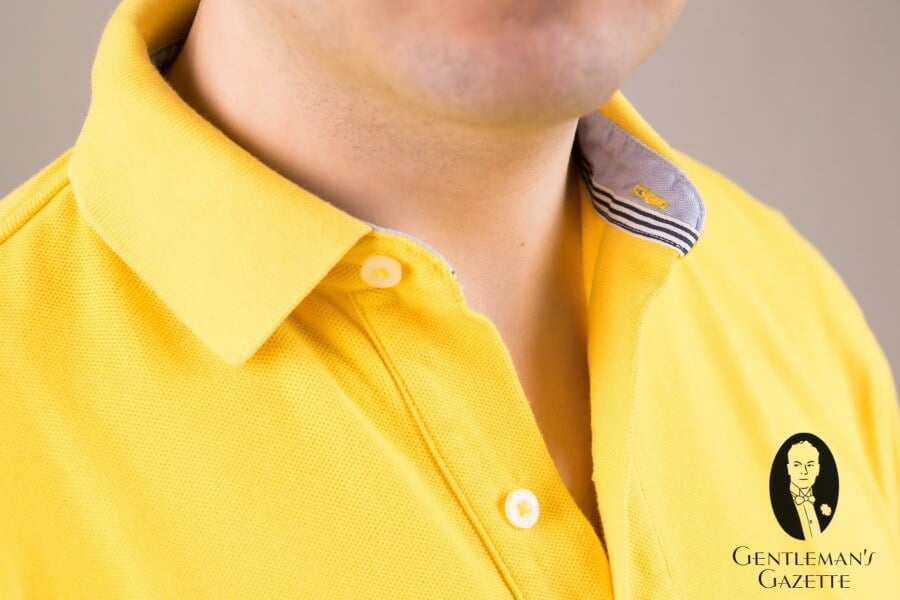 If you want to take the next step up, I would suggest to add a collar such as here on this polo shirt. Make sure not to get those flimsy collars. To learn more about polo shirts that fit, what to look for, what fabric to go for, I suggest to check out our in-depth polo series which is several videos and everything you want to know about great polo shirts.

If you want to look different, I suggest to go with a popover shirt specifically this summer and it’s basically a dress shirt that has a fly that goes only to the middle so we have to pop it over your head just like you would with a t-shirt. Since it’s a little more casual than a dress shirt, I suggest to go with a summery fabric that is breezy, ideally, you add some linen to the mix, just like the shirt I’m wearing here right now, because it has a more summery casual character that is just in line with summer. Usually, those shirts come long-sleeved but you can roll them up and if you want to learn how to do that please check out our guide here. 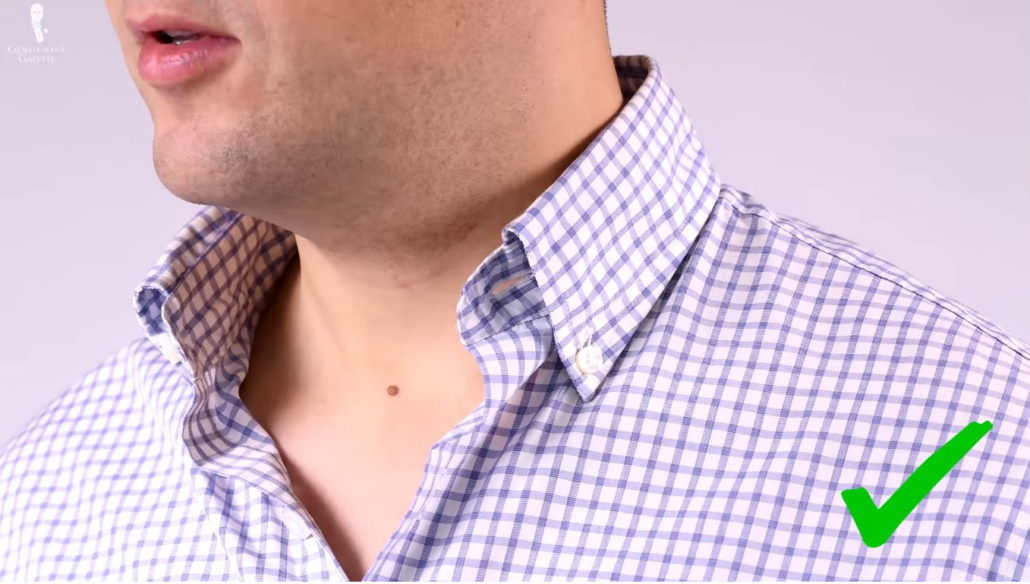 You want to take it even a further notch up, go with a dress shirt. Here, I’m wearing a cotton dress, it has like a check pattern and some colors; it’s more interesting than a plain white oxford shirt or maybe a light blue one. At the end of the day, if you just wear a dress shirt, add some color, otherwise, it just looks like you’re using your regular white and light office shirts and wearing them at night and that’s not ideal. Now, I know it’s a far cry from a t-shirt but if you want to go in more formal and stylish, I suggest you add a blazer to the mix with your dress shirt because it just looks very handsome and debonair.

It’s clear, a t-shirt has very limited use and you can wear it if you work outside, if you do physical activity, or if you go to the gym, otherwise, I suggest you always upgrade and it probably won’t come as a surprise that I personally wear t-shirts very rarely. I just like the dressier side of things because I’m perceived in a different way and people look at me in a very different way because they don’t think of me as cheap but rather as competent, stylish and smart.

How A Suit Should Fit